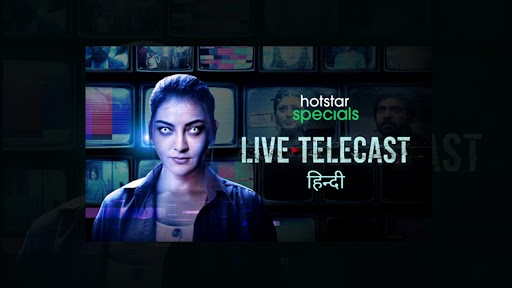 Live Telecast is a 2021 Indian Tamil-language horror thriller web series released under the category Hotstar Specials, written and directed by Venkat Prabhu. The series was supposed to be a dream project in his directorial debut which later got off due to unknown reasons. It features Kajal Aggarwal, Vaibhav Reddy and Anandhi in the leading roles. The first episode of the web series was released on 12 February 2021 under the category Hotstar Specials.

Kajal Aggarwal makes her debut web series in Live Telecast that comprises of comedy and horror. Live Telecast includes seven episodes as of now and is being streamed on Hotstar USA.

The web series revolves around Jennifer Matthew and her production crew which reside inside a house to shoot a reality TV show. Things go out of hand as they come to know that a ghost haunts the place.

Subscribe to Hotstar USA to watch the Indian Horror Web Series Live Telecast. Use coupon code STAR2021 to get exciting offers with your annual subscription.